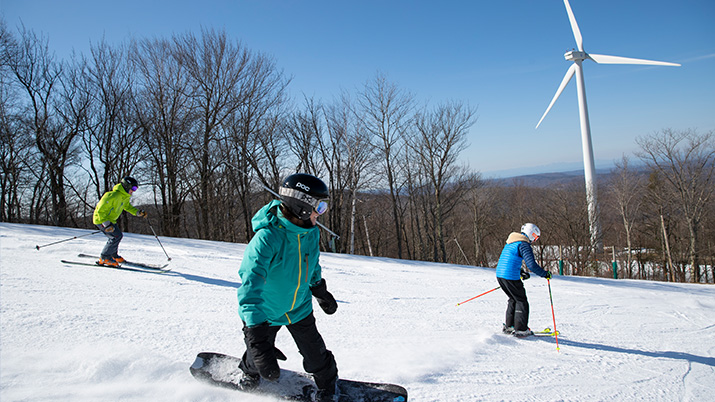 The Jiminy Peak Resort Management and Employees are committed to being responsible stewards of Massachusetts’ natural resources. Massachusetts’ beauty and health are an integral part of our business. We live here so working to maintain it comes naturally.

Our development and maintenance programs are guided by principles of land and energy conservation, by forest and wildlife habitat preservation and by maintaining Massachusetts’ water quality and aesthetic beauty.

In 2008 Jiminy Peak was awarded the Golden Eagle Award by Clif Bar and the National Ski Areas Association Overall Environmental Excellence for the construction of Zephyr.

Jiminy Peak strongly believes in preserving the Earth for future generations. We are showing our commitment by being the first Mountain Resort in North America to install a wind turbine in order to generate clean, natural energy. Together we can shape a sustainable community for the future.

The turbine helps to protect the long-term viability of Jiminy Peak as a resort and therefore helps to assure jobs better than being at the risk of changes in power prices.

Perhaps more importantly is the impact of this wind turbine on our generation’s grandchildren and great grandchildren in a country where we have too much dependency on fossil fuel for energy.

When the turbine is running at full capacity one would measure about 60 decibels at the bottom of the tower. Sound attenuates as one moves away from the source so at about 200 yards, the sound level would be less than 30 decibels which is equivalent to a quiet whisper.

Since the Jiminy Peak wind project did not meet or exceed any MEPA review thresholds the project team filed a Voluntary Environmental Notification Form.

We retained a group of knowledgeable, experienced people on environmental and wind turbine issues in order to analyze and understand every aspect of the environmental impacts this project may have.

We do not anticipate that there would be significant impact to any plant or wildlife that exists at Jiminy Peak, and do not expect the project to interact with any endangered species.

The wind project at Jiminy Peak will have little to no impact on local impacts on avian and other wildlife species. We are mitigating our potential impacts by using previously disturbed ground for the project’s location and transportation routes.

The potential impact wind power can have on avian life is often due to cutting off large areas of migratory flyways with strings of wind turbines or wind farms. A single wind turbine at Jiminy Peak should have very little impact on such a flyway. We performed a Phase 1 avian impact assessment to ensure that this project would not have an affect on local or migrating avian species.

The turbine is designed to shut down during icing conditions, and the machine will not restart until the ice has melted off the tower and blades.

Wind turbines have a 30-50 year design life. However, electrical and structural components, including the tower, foundation, and interconnection equipment have a far longer design life. Jiminy expects that at the end of the useful life of the wind turbine and blades, it will re-power the equipment using the same tower and electrical components but replacing the generator with a new and more efficient unit.

Jiminy is proceeded cautiously with its first wind turbine. This wind turbine was designed to provide approximately 1/3 of the total electrical needs of the resort. If the first project is successful, a second machine may be considered on the eastern side of the resorts property. Jiminy has no interest in a commercial wind farm on its ridge. Any wind power at Jiminy will be used solely to reduce the electric bills of the resort and lesser the reliance on fossil fuels.

Reduction in Electricity Consumed From Grid

Through renewable energy sources and conservation efforts, Jiminy Peak has reduced its energy consumption from the grid by 100% since 2006!

In 2016/2017, Jiminy Peak Mountain Resort replaced all 450 guns on the mountain with the Sledgehammer technology. Coming off the most challenging year in the history of the resort, it was the perfect time to make a whole sale change that would take the already powerful snowmaking plant to the next level. Since installation, the Sledgehammers have created dramatic energy savings by using less compressed air with a 100% increase in snow output.

Installation of high efficiency LED bulbs on all 21 night trails.

Convert 1200 feet of hallway lights, and 5 stair towers that operate 24/7, to compact fluorescent lights in order to be more efficient where lighting is required around the clock.

Capturing heat from compressors during 800 hours of operation in the winter. Reduces propane and electricity requirements. Using the heat from 2 compressors to heat 34,000 square feet of space in 3 Village Center buildings avoids the need of an equivalent of 63,800 kWh.

Replacement of 1,000 watt bulbs to 400 watt high efficiency bulbs on 5 trails. The lights have the ability to go to 1/2 wattage when used during snowmaking – a winter benefit only.

Jiminy Peak was awarded the Climate Change Impact Award from the National Ski Areas Association at the 2019 NSAA National Convention and Trade Show in recognition of our sustainability efforts.

Taking waste oil from snowmaking compressors, grooming machines and all vehicles to heat Mountain Operations building using approximately 200 gallons of waste oil per year. This process avoids disposal needs of old oil and eliminates the need for consumption of new fossil fuel from the Earth.

Obtained a permit and began construction of the 6 million gallon Kinderhook Reservoir for storage of water used for snowmaking. This allows water to be taken from the Creek only at high flow times and stored in the reservoir for use during the low flow periods. This commitment protects habitat in the Kinderhook Creek and trout eggs in the gravel along shallow stream edges that would freeze in low flow due to extended extreme cold snaps.

Summit Reservoir stores 12 million gallons of water near the top of the mountain. Two major benefits of the summit reservoir are

Water can be pumped and stored during high stream flow periods and warm weather therefore putting water in reserve. The gravity head pressure allows the lower 3rd of the mountain to use this water with no pumps and increases production of snow when cold without additional peak demand electric usage.

Our towel and sheet program saves approximately 25,000 gallons of water a year by only washing the sheets and towels when requested by guests staying for more than one night. We have eliminated the use of toxic cleaning agents and now only use green, biodegradable solvents and cleaners.

Allows water temperatures to be reduced from 90 to 60 degrees (saving fuel oil), cuts the amount of chemicals required by 66%. Water is therefore cleaner before it goes to the wastewater treatment plant where the balance of the chemicals is removed. Because more water is extracted from the fabrics during the wash cycle. This process also cuts down on dryer time thus reducing propane, electricity and labor.

Conversion of bathrooms of several old building mens bathrooms. 100% installation of 7 urinals when JJ’s lodge was built in 2005. Saving 40,000 gallons of water per urinal. 12 total to date yields a 486,000 gallon reduction annually in water used.

Jiminy Peak Mountain Resort took another step toward environmental responsibility with the installation of a cogeneration unit in the Country Inn. A cogeneration unit uses propane gas to power a motor. The motor produces heat which is cooled by circulating water. The hot water produced during the cooling process provides the heating source for the central core of the building that includes the year-round outdoor pool, hot tubs and John Harvard’s Restaurant & Brewery as well as the Front Desk facilities and conference rooms of the resort.

What makes cogeneration particularly popular is that a by-product of the motor’s operation is the production of electricity – essentially two for the price of one. The cogen unit produces 400,000 kWh per year, which is consumed entirely on-site, thereby reducing the need for 400,000 kWh from the grid. Cogeneration systems are more environmentally friendly than traditional power plants and will result in the reduction of carbon and greenhouse gas emissions.

2.3 megawatt community solar facility located on 12 acres of Jiminy Peak’s property. The solar facility is owned by Nexamp, who develops, designs, finances and operates commercial-scale solar systems. Nexamp acquired the development rights for the project from EOS Ventures, which was the driving force behind the development work on the project for over 3 years. The work included design and engineering for the project, work with state programs and utilities and work with the town of Hancock.

Nexamp sells energy credits to its partners, like Jiminy Peak, to offset energy expenses. Jiminy will, in turn, offer these credits to up to 200 neighboring homes and small businesses. The project significantly expands Jiminy Peak’s renewable energy commitment while extending the environmental and cost-saving benefits of solar energy to the community. The Nexamp Peak project represents the largest community solar project of its kind in the Northeast.